The Transition Year Programme offers pupils a broad educational experience with a view to the attainment of increased maturity, before proceeding to further study and/or vocational preparation.  It provides a bridge to help pupils make the transition from a highly-structured environment to one where they will take greater responsibility for their own learning and decision making.  Pupils participate in learning strategies which are active and experiential and which help them to develop a range of transferable critical thinking and creative problem-solving skills.  The Transition Year Programme also provides an opportunity for students to reflect on and develop an awareness of the value of education and training in terms of careers and life-long learning.

This years transition year students attended a Project Maths workshop in Larch Hill Dublin on the 15th October 2016. All students got involved in various problem solving questions followed by fun activities such as archery. The day was a huge success and greatly enjoyed by all students. 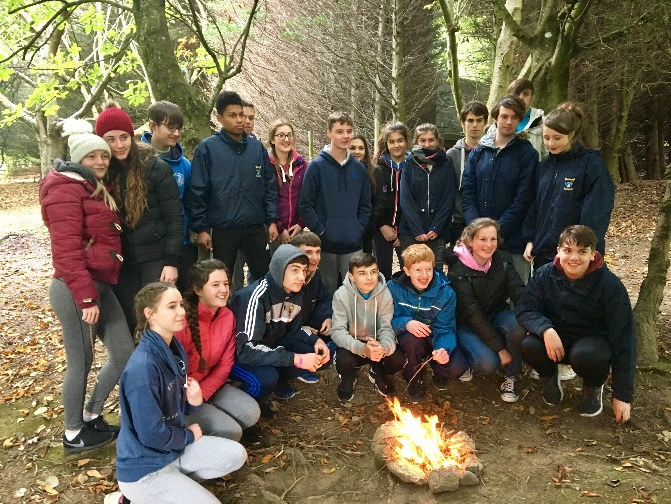 On the 20th September, 49 students left Bridgetown at 7a.m. for the National Ploughing Championships in Tullamore, Co. Offaly. After three long hours we arrived at our destination. Great excitement was ahead, when we realised the only way to the gate of the field was on a trailer pulled by the tractor. There was so much to see when we arrived, animals, machinery and lots of farmers with their families. We watched the actual ploughing championships, it was fascinating to see them compete, with so much attention to detail. We saw some young farmers playing soccer with tractors, it was hilarious. There were lots of opportunities to shop with all the different stalls, all needs catered for; food, farming and fashion. A great day out, and not just for farming enthusiasts!

A trip to the wonderful Waterford Walls….a sight to behold!

On the 29th of September we got the opportunity to visit ‘Waterford Walls’ a series of works by prolific Irish street artists spanning across Waterford city. We left at 9 am and drove to Waterford where we met our tour guide at Waterford Walls HQ. The walk spanned from a dark back alley brightened up by striking and lively paintings that covered the walls to many other more obvious locations. Some of these paintings expressed the artists individual style and others did graphic painting some of which were finished in mere hours. The tour lasted for 2 hours and continued through some strange locations around the town of Waterford such as a car park or the side of a church. A lot of these paintings hid deep and powerful messages such as depression, individuality, racism and animal endangerment.

Well done to all the artists….serious talent!

As part of our TY music class last February we did a Drumming Workshop. We learned a variety of skills such as what way to hold a drum stick, how you hit a drum can affect the sound as well as learning the names of the different drums.

At the start of the workshop, our drum teacher asked us all to stand up and to do beats with our body and our feet. He asked one side of the class to do one type of beat and the other side to do another and then joined them together. It was really cool, listening to the sounds coming together.

He distributed the drums to us and taught us different beats and variations, then we all joined in. It sounded like a proper band, it was so loud and powerful. We created a whole song, with our new sounds, we all enjoyed it so much.

So what is Young Social Innovators about?

YSI is about encouraging young people to re-imagine the world and empowering them to bring their vision to life. The vision of our T.Y. class is that females would have a much stronger participation in sport. We have spent a number of weeks researching this topic, and set off for Kilkenny in March to ‘speak out’ about our topic, competing with many schools from Leinster. This was our opportunity to present our findings in a dramatic way. This is how our day unfolded…

We left for Kilkenny at 9.30am on Wednesday the 8th March. We loaded our props and costumes onto the bus. Our first stop was the McDonalds in Kilkenny to fuel up for the performance ahead. We made it to the Lyrath Convention Centre and rushed to change into our costumes, the villains dressed in all black, the superheroes in purple and the rest of the class sported Wexford jerseys.

We eagerly awaited our performance, waving our Wexford flag and rehearsing our lines. Other performances addressed issues such as farm safety, speeding, drink driving, mental health and cyber bullying. The event was hosted by the DJ John Gibbons.

We were called on stage to present our Speakout which took weeks of preparation. We wrote and practiced our script which incorporated our research carried out in the earlier stages of the project. Our project was about the lack of female participation in sport. We used the villains to represent the barriers facing girls in sport: lack of motivation, lack of body confidence, lack of safety and lack of confidence. We presented a drama about a girl who was trying to avoid P.E because of the villains but in the end with the support of her passion (represented by the superheroes) she was able to re-join the class with confidence in her abilities. To conclude the presentation we explained our action project to be held within the school to encourage girls within our community to take part in sport. It was very enjoyable and we are currently waiting to see if we get through to the next round. Watch this space!!

Time to put on our ‘broga’ for this year’s Céili

TY students organised a céili during Seachtain na Gaeilge for all first year students in the month of March. We started off by picking what dance we would teach them. After much discussion, we choose ‘The Walls of Limerick’ as we all learned how to do the dance. Our next task was to teach all the first year Irish classes. Dancing with the stars, eat your heart out!!It was great craic showing the classes how to master the steps and sequence, the majority picked it up very quickly.  We picked our canteen as the venue for our dancing extravaganza. Luckily all the tunes were performed by students from our school. All of the first years, teachers and TY students got involved. It was a fantastic day all round and enjoyed by everyone!

Our geography class took part in International Awareness week to raise awareness and to end racism. This week was from the 15th to the 20th of March. A TY student was chosen every day and given 4 red cards that said ‘Show racism the red card’. They were told to hide them in places around the school. The first student to find the card and give the card to the chosen TY student won a voucher for Centra. Each day before break there was an announcement over the intercom to tell the students which TY student to give the card to if one was found.

T.Y. refurbishment of the old prefab

5 TY students took on a refurbishment project with Mr. Byrnes at the start of the school year. We started by clearing out the entire prefab and built a partition. We built benches around the edges of the front room and 2 walls in the second room with a big bench in the middle. We painted the walls, sanded the benches and then we varnished the benches. These changing rooms have helped our school teams immensely. They can now change in an area that is fully kitted out. The group gained lots of skills putting this transformation together. Interior design is our next career.

Starting in November, the TY class took part in a workshop designed to introduce architecture to young people. Local architect and past student of the college, Emer Doyle came to our DCG classes every Friday for 12 weeks. In the beginning we learned basic architectural skills such as lighting effects, clever storage and much more. We were given the brief to design a reading area for our school. As the weeks went on our class progressed from making basic mood boards of our ideas, to making detailed and to scale plans. In the last 3 weeks of this workshop we made models of our chosen designs. We furnished, carpeted and even replaced walls in our models. After a lot of hard work we were all very proud of our finished products. On the 5th of April the class travelled to Tullamore with Ms. Toomey and Mr. Kent to present these models. By taking part in this workshop the TY’s feel that they have learned valuable skills to carry forward and many possible career options for the future.
As part of TY Enterprise our class took part in Student Enterprise awards run by Wexford local enterprise offices. This project lasted from September 2016 to February 2017, our class was split into 7 teams. 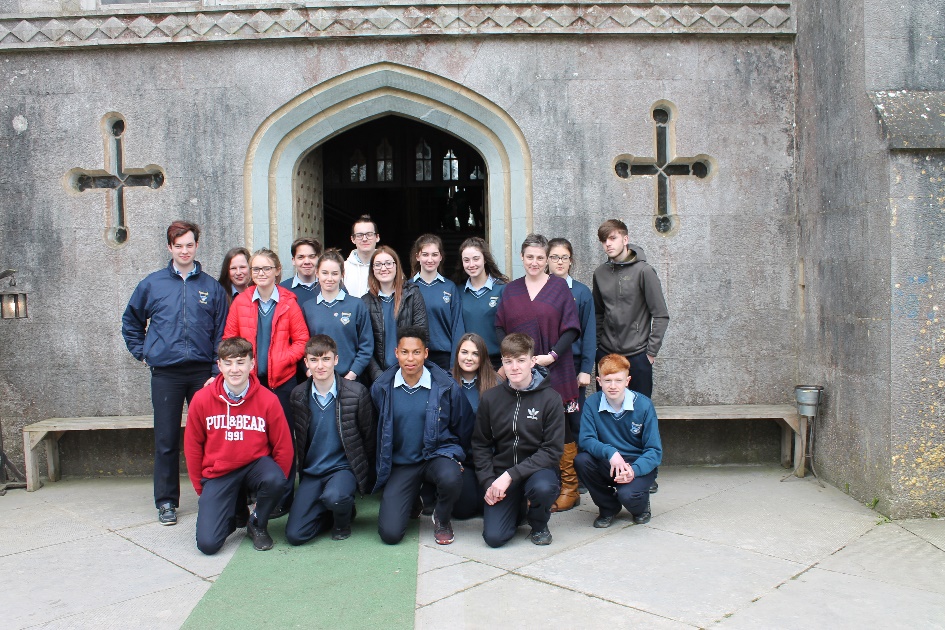 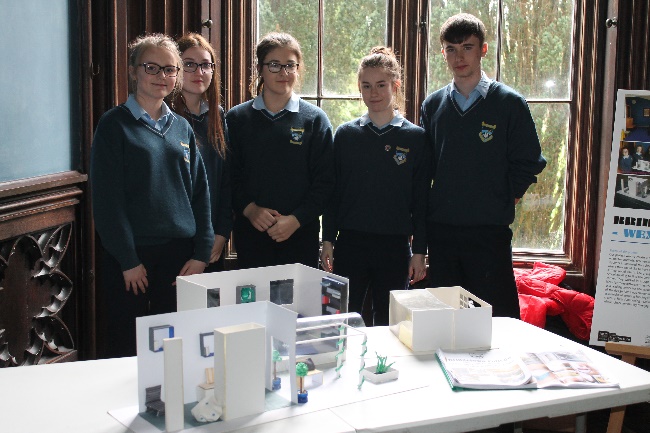 Our team members were Róisín O’Connor, Lauren McCormack and Lara Guthrie. The name of our student enterprise project was ‘Gear fresh’. We carried out market research to come up with our idea of making gear bag air fresheners that were small but strong and would last for a long time. We used two pieces of netting and filled it with Unstoppables. As a team we worked very well together, because we had known each other well before the project so we all knew what we were capable of. We all had equal parts and got the work done, along with having fun doing it. We all learned new skills both as a group and individually.

We sold most of our products to students and teachers, mostly around December and January. Our team won our school final and qualified for the county final. We attended the county final in Claytons Whites hotel on the 21st of March 2017. We enjoyed seeing all the other products the other school teams from around the county had made

The Transition Year students received their certificate of achievement for the successful completion of the Junior Achievement Learn to Earn programme. The programme is supported by Bank of Ireland and was successfully carried out by Kirsty Little.