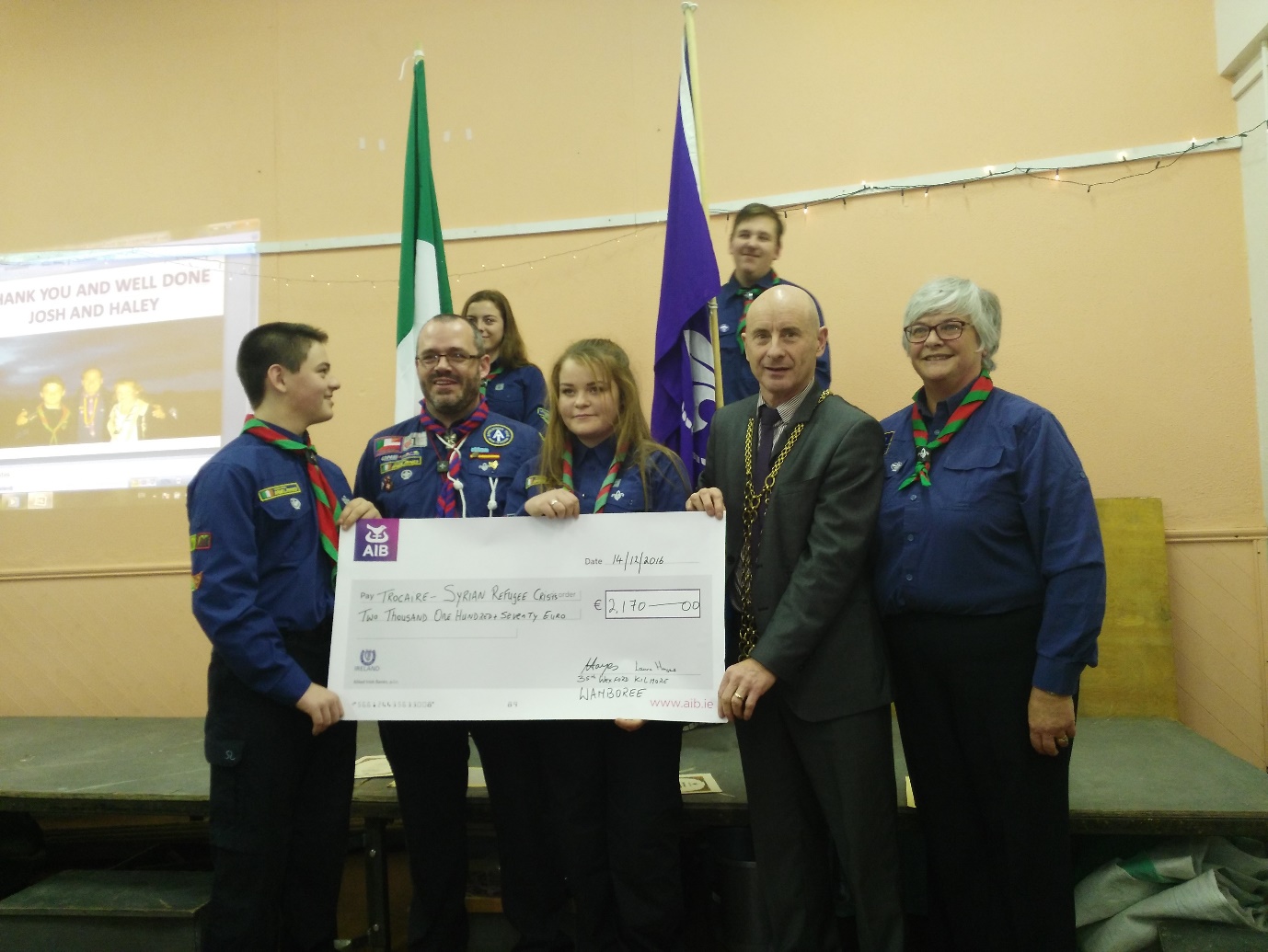 Rees has been chosen for the Minor County Team this year. Rees normally plays for Kilros.  This team won the County Final this summer. Rees has played centre forward on Austin Gleeson (Hurler of the Year) who plays with Waterford and scored 3 2 in the match. Rees was also chosen for the Combined Schools’ Team this year. Well done Rees!!

Paraic and Cristoir made the Combined Schools’ Team this year.

Cristoir and Paraic both won an All-Ireland during the Summer. Both boys are superb hurlers and we are delighted with their achievements.

David was selected for the Fourth Celtic B Team. We are delighted with this achievement and we all hope David makes the starting team. Brilliant News!

Kyle also plays County hurling for the U17. Kyle has played for St. Anne’s team since he was in primary school. Well done!

Kyle Kennedy also made the Wexford Youth Soccer team.  Kyle is obviously talented in both hurling and soccer!!

It’s has been very busy with handball in the school recently.  The highlight was the trip to Dublin for the beginner Leinster One-Wall Finals Day where we had two teams compete after intense trials held in school. Mr Codd and Ms O’Mahony, along with supporters, watched the team of Michael Sheil, Callum Smithies, Lucas Pierce and Conor Scallan claim the Leinster title. The second team missed out on the final on points difference. On the team were: Dorian Reville, Rian Stafford, Cian Corish and Gavin Lacey.

At school we have been playing through the early rounds of the 60×30 competition in memory of John Ryan in Bridgetown Handball Alley. This has been very successful so far with a great many students involved. Finally on Tuesday we had the John Doyle Trophy between players from the Ballymitty area and the Bridgetown area. Team captains were Conor Scallan (Bridgetown) and Dean O’Neill (Ballymitty). A number of guests from the local handball scene and John Doyle’s sister, Maggie, were in attendance. Going into the final game, which was the battle between the captains the score on aggregate points, was Ballymitty 54-53 Bridgetown. Dean O’Neill beat Conor Scallan which meant Ballymitty won the John Doyle cup. 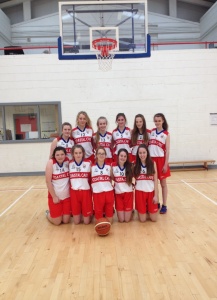 Under 16 Girls’ Basketball Well done to the under 16 girls who won the South East final and got through to the Regional Final in Waterford on Friday, 9th December.

The girls won the Wexford section of Basketball Ireland league and went on to beat Pobail Scoil Osrai, Kilkenny, in the South East Regional Quarter final and Ard Scoil na Mara, Tramore in the semi- final.

They were narrowly defeated by St Brigid s Callan in the Regional Final and the next stage of the competition will be All Ireland Preliminary Play-offs which will take place on the 9th January.

Rebecca Burke LC2 recently played on the South East Regional Basketball team in Colaiste Iognaid in Galway. The team came fourth in the tournament. There were eleven on the team. Rebecca plays in post position and she was the only member from Wexford on the team. Well done to Rebecca! 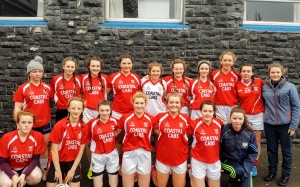 Senior Girls’ Football team who were beaten in their Leinster qualifier. Well done to all the girls for their commitment and effort since September. They had some great wins over Duiske College, Graignamanagh, Meánscoil Gharmain and Selskar College at group stage, but unfortunately came up against a stronger team from Tullamore in their last game. 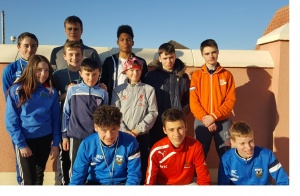 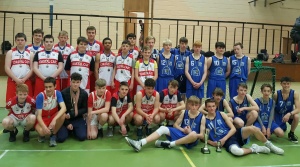 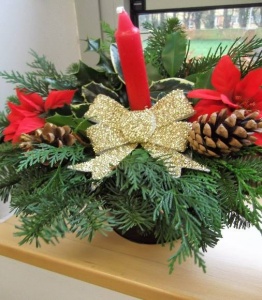 Ms. Pauline Duggan was in Bridgetown College on Friday the 16th December to work with parents in creating lovely Christmas table centrepieces.

Christmas songs were sung by Jessica Horan, LC1, and this added to the festive experience. 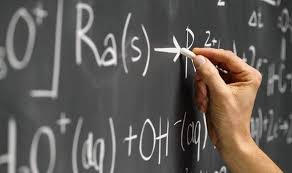 Wexford Local Development funded our revision Maths classes for LC2 students for a second time this year. Graham Grant (teacher) provided four one and a half hour sessions between November Wednesday 23rd and Thursday December 15th. The cost per student for the four weeks was €10.

On Thursday the 24th   November JC3 and LC2 students attended a two and a half hour session on study. Session focused on accelerated learning, planning, POKER a study technique, note-taking, memory techniques and a review session. As part of the programme each student received a study journal.

This study skills session was funded by the SCP.

Bridgetown College Open Night took place on Thursday the 1st December. 336 visitors signed the Visitors Book. Visitors to the school commented on the range of subjects available, the variety of activities, the colourful and interesting displays, the positive atmosphere in the college and the warm welcome visitors received from our courteous stewards.

Ms. Kane took her 2nd and 3rd year students to Dublin Zoo as part of their Action Project for CSPE. The students thoroughly enjoyed the trip.

As part of our Development Education Programme, Ms Norris, Ms Kelleher and Ms Kelly organised a ‘Local Farmers Market’ which took place on November 28th.  The market was one of a number of activities which focused on the issue of ‘food miles’.

The vast majority of the products on sale were made from locally sourced ingredients, thanks mainly to sponsorship from local producers.  The €492.67 raised will go towards the further development of the school garden.

At 12.30 Mr Frank Lonergan a former teacher in Bridgetown College unveiled the ‘Global Citizens Passport’ which was achieved earlier this year.  The passport was awarded by WWGS (World Wise Global Schools) in recognition of the work done in Bridgetown College in the area of Development Education.

The annual Christmas celebrations took place on Monday the 12th December.  The activities and Christmas treats were enjoyed by one and all.

On the 29th November Ms. Walsh and Ms. Cantwell accompanied 46 first year students to a frosty Heritage Centre. Despite the wintry conditions, the students were in high spirits as they explored snapshots of Ancient Ireland.  The wattle and daub reconstructions were of particular interest to the first years and the small reconstruction of an Irish monastery proved very educationally. 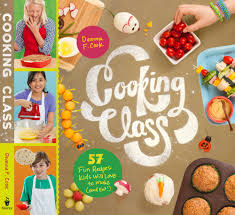 Ms. Davina Dowling commenced a cookery course for parents on Monday 16th January in the school kitchen. The five-week course will cover recipes, healthy eating and nutrition.  At the end of the course parents will receive certification from the HSE and a beautiful cook book. The cost per class is €5. 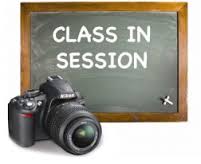 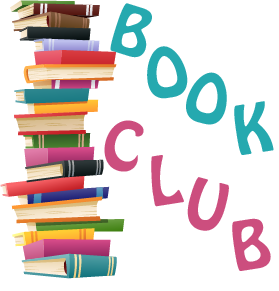 In January we hope to have the Book Club meet in our newly refurbished library.  New members are welcome to attend. Time and date to be agreed. Any suggestions for new books for the club to read would be more than welcome!! Come and join us for a coffee and a chat. A huge thank you to Lee (Librarian) in Selskar College who has supplied the books for our club for the past three years. 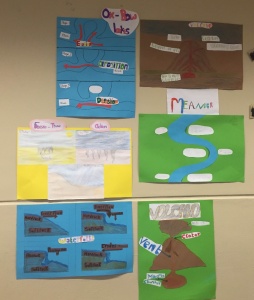 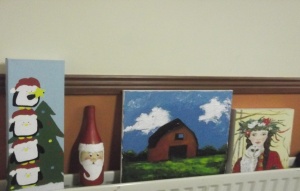 On Wednesday the 14th December the two Art groups came together to enjoy a Christmas celebration and to meet for the first time. In the picture below there is a sample of the work painted on the day. The groups will meet again in January.

Ms. Jordan and Ms. Fortune’s LC2 and LCVP students went on a trip to Waterford Crystal on the 8th December to prepare a section dealing with enterprise for their LCVP portfolios. 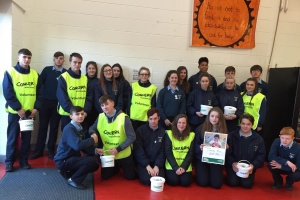 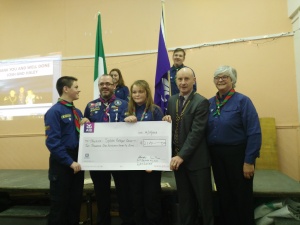 Josh Power and Haley Power handing over a cheque for over €2000 for Syrian Refugees to Mr. Dan O ‘Leary.  Also present were Mayor Frank Staples, Ms. Breda Hayes and in the back row: Saoirse Foley and Daffyd Bradfield.

Josh and Haley recently received the Chief Scout Award which is the second most prestigious scout award. Josh and Haley were presented with the award for organising a scout camp, “Wamboree” in Kilmore, it was in aid of the Syrian refugees. Over 250 children from all over the county came. There were fun bases, a popcorn machine and a mobile cinema in the field.  In total, they raised over €2000.